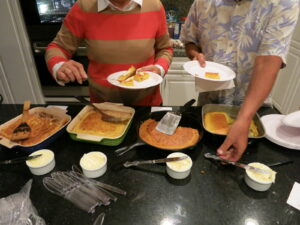 In the picture above, from left to right

The Shortcut—Did it hold its own?

While I usually do not promote specific products, this is a favorite shortcut—and don’t we all sometimes need a shortcut!  For as long as I remember, Morrison’s sold individual packets of its Corn-Kits in grocery stores where I grew up in Texas.  You simply combine the mix with one egg and 2/3 cup milk.  Then you bake it in a buttered baking dish at 425 degrees until it is golden brown.  (Note that you may need to lower the temperature by 25 degrees if you are using a convection oven.)  It is amazing that such a simple mix yields homemade tasting cornbread.  In fact, my mom gave up on making cornbread from scratch years ago because this is such a close match.  To find out how close, I surreptiously used the mix as one of the four cornbreads for our blog party tasting.  No one knew ahead of time that one of the cornbreads was not from scratch.  But don’t worry, I fessed up after the votes were in.  The results of the voting are at the end of this post.

In summary, this recipe can be described as follows:

Cornbread—adapated from a Test Kitchen recipe

In summary, this recipe can be described as follows:

Everyone was asked to pick their top 2 choices.  Their top choice received 2 votes, and their second place choice received 1 vote. In comparing the three, from-scratch recipes, the winner was the Southern Skillet Cornbread—adapated from a FineCooking.com recipe with 11 votes.  The Cornbread—adapated from a Test Kitchen recipe was a close second with 11 votes.  The Southern Cornbread—adapted from a Food Network Magazine recipe received a lone vote. It seems that buttermilk-based recipes yielded more flavorful cornbreads.  The whole milk recipe was bland in comparison.  The FineCooking.com recipe also benefitted from sour cream, which tends to make a more tender cornbread.  That combined with cooking it in the cast iron skillet was likely what gave it the edge over the Test Kitchen based recipe—even though the Test Kitchen recipe used bacon, which is hard to beat.  If I had had two cast iron skillets, I would have baked the Test Kitchen based recipe in a skillet as well.  (Santa?)  I wonder if that would have been enough to elevate it to a tie or would the sour cream still have beat out the bacon drippings. The big surprise was that The Shortcut—Corn-Kits garnered 14 votes.  I knew I loved this shortcut, but who knew that the majority would agree in a blind taste test.  Everyone was surprised and excited that it would be easy to duplicate at home, so I gave out Corn-Kits as party gifts at the end—after all I had ordered a case, so no shortage.  When I moved to Arizona and California, I had trouble finding the Corn-Kits, so Mom used to bring me a few in her suitcase when she would come to visit.  Then I learned that you can order them from the company.  Last time I checked, their online ordering had some issues, so I just called.  If you are interested, Morrison’s can be contacted at  1-800-531-7912.  They will ship these by the case (36 packets per case).  The Bis-Kits are also good and yield a very light and fluffy biscuit.  While my personal, overall favorite was the skillet cornbread, The Shortcut was a tie for second for me (with the cornbread with bacon-drippings earning points from me too).  In the end, we had three out of four with close votes (14, 11, and 9 votes each).  It was a lot of fun to taste the different cornbread recipes and the amazing dishes everyone brought to go with the cornbread.  I invited our friends to send me their recipes for their dishes  if they want to share them here.  If they do, I will post them.  I will also be posting the pork simmered with salsa verde that we made soon for the Blog Party.

Now it is time to decide the theme of our next Blog Party!  Suggestions so far include pecans, pumpkin, pasta, and cookies.  What do you think it should be?