A versus B.  The only difference is the marinade.  Both have fresh squeezed lemon and lime juice, but A also has a small amount of fresh squeezed orange juice.  The orange juice takes the edge off the tartness of the the lemon/lime combo.  (Both ceviches also have fish, shrimp, tomato, cucumber, cilantro, and a little salt.  See the recipe tab for details.) 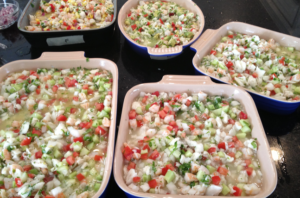 Everyone got one small cup labeled A and one labeled B.  Then they got to vote for their favorite by placing a shell in the mason jar that matched their preference.  Originally, I wondered if everyone would be able to taste the subtle difference in this first pairing.  They could and had fun discussing why they preferred one versus the other.  Some liked the softer tones and others like the stronger tartness. 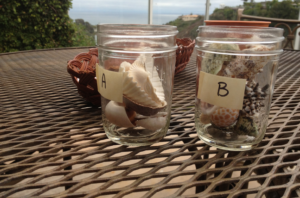 It was close, but B (lemon/lime only) won 10-7.  I was a little surprised.  I had thought that A would come out on top because the orange softens the tartness, but the majority preferred the more traditional lemon/lime version.  Both were good, so you get to decide what you prefer.

C versus D.  C was just A making a second appearance (lemon/lime/orange marinade).  D was B (lemon/lime marinade) with finely diced serrano peppers for a little kick.

The spice was a hit with the majority.  It won 9 to 6.  (One person didn’t vote because he couldn’t decide between the two.)  It was interesting to hear one guest say, I don’t like spicy things, but I really like the spicy ceviche.  The key here was to keep the spice subtle to please a wide array of guests.  That means that the serrano needs to be finely diced so that you don’t get a big bite of spicy pepper in combo with the delicate fish.  But we had people on both sides of this one.  One friend indicated that he preferred no spice at all to let the fish be the star, and another guest wanted even more spice.  It just goes to show that our palates are all quite different when it comes to our preferences as to how spicy we like food!

And the winner is…F (the pineapple and mango version shown below).  It won by a long shot—14 to 2.  One person said that they love avocados and were surprised that they actually picked mango and pineapple over avocado, but the somewhat non-traditional combo won them over.  The avocado version was yummy too, so take a look at that recipe if you like avocados as much as I do.

It was also interesting to see people pick the spicy version in the prior round and the fruity in this round.  Was it the pretty color combination of the pineapple/mango version that won so many votes?  We do taste with our eyes first as someone pointed out.  Was it the balancing provided by the fruit following the mildly, spicy version that influenced the choice?  Or would the pineapple/mango version have prevailed regardless of the order of tasting just because it was really palate pleasing?  Whatever the reason, it was tasty and many of our friends went back for second tastes!

One friend said, they would have been perfectly happy if they had been served any of the ceviches by themselves but it was fun to see that when given the opportunity to do head-to-head comparison, they could actually make distinctions and pick favorites.

Now we just have to decide the theme for the next Blog Party.  Ideas?