The taco bar turned out great.  We had marinated, grilled flap (not flank steak—see below) steak.

Lots of questions about flap steak!  What is flap steak.  Is it skirt steak or flank steak?  What part of the cow does it come from?  I have cooked all three in the past and have come to prefer flap steak, but I needed to do a little research to field these questions.  Here is what I now understand (no warranties).

Back to the party…

For the chicken lovers in the crowd, I shredded roasted chickens (yes, the ones you can buy at the store—multiple ceviches for 19 friends took a chunk of time, so this was a great shortcut).  Then I simmered the chicken with a medium-spicy salsa in a heavy dutch oven for about an hour or so.

That gave the chicken time to absorb the flavors and time for some of the liquid in the salsa to evaporate so that the tacos would not be too messy.  Be careful if you buy the pre-roasted chickens though.  These chickens are usually fairly salty and when simmered the flavors concentrate even more, so simmer the chicken awhile and then taste it before you add more seasoning.  Depending on your preference and how much additional salt was in the salsa you used, you may not want to add any more salt. 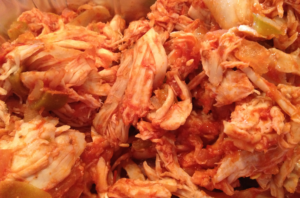 When you grill the vegetables remember to slightly undercook them if you will need to keep them hot during a long evening.  I cooked the peppers and onions a little past the stage shown below.  You can keep them hot in a 200 degree oven until you are ready to use them.

But at the end of the evening they will look like this from continuing to cook even at low temperatures. 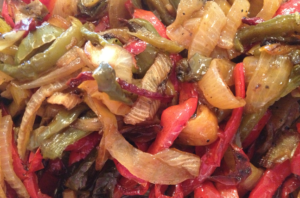 They are still really tasty, but much softer.  The other option is to cook them on the grill in a grill basket while hanging out with your friends.

The final touches for the tacos included guacamole, cheese, salsas, jalapenos, and sour cream.  The guacamole disappeared quickly, and it was fun to see everyone load up their tacos with various combinations of the other ingredients (I skipped the sour cream—my friends would have predicted that decision). 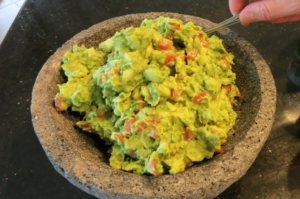 As it cooled down and got dark, we fired up the firepit and those with a little room left for more food, roasted marshmallows for smores.  Some just went straight for the chocolate, though. 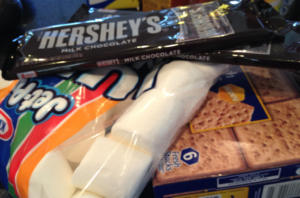 What fun!  I am already thinking about the theme for the next Blog Party.

Ingredient Challenge: Use Fresh Beets This Month & Post a Photo!

Jan 6, 2016
Ingredient Challenge: Use fresh beets in a meal before midnight Pacific time on February 15, 2016 and post a photo or email it to jodale@foodieoasis.com

Why Didn’t I Know About Delicata Squash?