Pasta is one of my favorite foods, but you need to follow a few simple rules to avoid common mistakes. 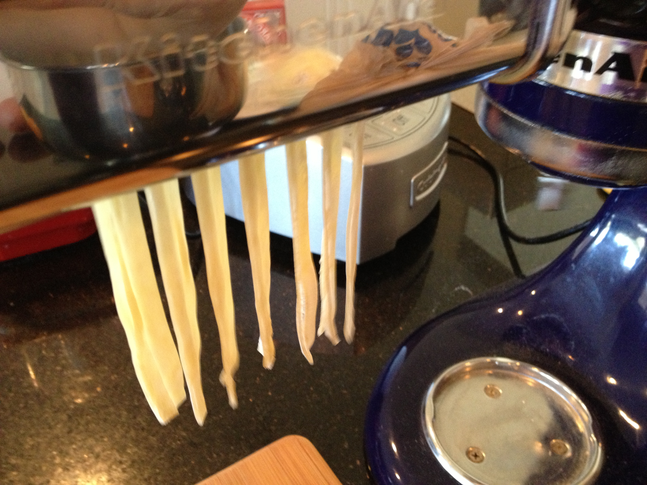 1.  Don’t forget to salt the water

The only real chance that you get to season the pasta itself is when you are boiling it because that is when the pasta absorbs the most liquid.  If that liquid (usually water but occasionally broth or something else) is not seasoned, then your pasta will not be seasoned.  Therefore, add a generous amount of salt to a large pot of water, so that your pasta will be flavorful.

Some people add a little olive oil or vegetable oil to the pot of water to prevent the pasta from sticking together while it is cooking.  That actually causes more harm than good.  Cooked pasta is starchy, which helps your sauce stick to the pasta.  However, if you put oil in the water, your cooked pasta will have a slicker, oily surface, and the sauce will not adhere to it very well, which is not what you intended.  Instead of using oil to prevent the pasta from sticking together, be sure to use a large pot with plenty of water to give the pasta room to move around while it cooks.  Also, be sure to stir your pasta when you first add it to the boiling water and occasionally while it is cooking.  These steps will prevent the pasta from sticking together while still allowing the pasta to retain its starchy surface so allow your luscious sauces will coat and stick to the pasta.

3. Don’t add the pasta to the water until the water is boiling (really boiling!)

Make sure that your salted water has reached a rolling, vigorous boil before you add the pasta.  Otherwise, the outside of the pasta will get mushy while the inside remains undercooked or worse yet, the pasta starts falling apart by the time it is cooked on the inside.  Try to be patient, the result will be worth it!

If you are using dried pasta, set a timer for 2 minutes less than the recommended cooking time.  When the timer goes off, taste the pasta.  If it is not done to your liking, then continue cooking the pasta and tasting it every 30-60 seconds until it is the desired texture.  Remember that it is better to slightly undercook the pasta if you plan to combine it in a hot pan with the sauce because the pasta will continue cooking when combined and heated with the sauce.  (Note:  If I plan to bake the pasta, such as for macaroni and cheese, I undercook the pasta by at least 2 minutes.)

If you are using fresh pasta, note that it cooks very quickly, so you will need to watch it carefully.   For example, fresh fettuccini may cook in as little as 1 1/2 to 2 minutes, and fresh ravioli may cook as fast as 4-6 minutes. If you bought the fresh pasta, check the package for suggested cooking times.  If suggested cooking times are provided, then follow the advice above—set a timer for at least 1 minute less and do a taste test.  If no suggested cooking times are provided and you are not experienced with cooking fresh pasta, then I recommend cooking a few strands of the pasta and tasting them after no more than a couple of minutes (longer for ravioli or tortellini) to gauge the cooking time.  Then you can cook the larger batch of pasta without worrying that you are going to overcook it, but still taste it a little before you think it will be ready.  You can always cook it longer, but you can’t go back and cook it less.

5.  Don’t rinse the pasta after it is cooked

Some people rinse their pasta after it is cooked, but this process rinses off the starch that helps the sauce stick to the pasta.  Instead, just drain the pasta using a colander and then combine it with your sauce.

6.  For soups, don’t cook the pasta in the soup unless you are serving the soup immediately and you do not plan to save any leftovers.

I love soups with pasta, but I hate it when the pasta in soup is falling apart or mushy.  The secret is to cook your pasta separately, and then add it to the soup at the last minute when you are serving it.  If I have leftovers, I store the pasta and soup separately and then add a little of the pasta to the soup when I am ready to reheat it—no mushy, disintegrating pasta even in the leftovers!

Jun 30, 2013
Coqueta is Michael Chiarello's first restaurant in San Franicisco.  He successfully transformed a small space  at Pier 5 on the Embarcadero into a warm...