These cupcakes were inspired by my grandmother and mother. 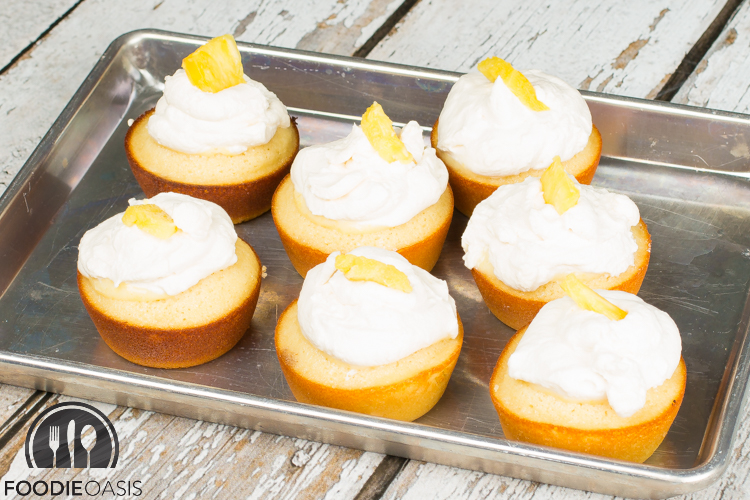 My grandmother loved sweets but was not a big fan of chocolate.  (Hard to believe not loving chocolate and being related to me, right?)  To satisfy her sweet tooth, she almost always had what she called “Plain Cake” in her kitchen.  It is easy to make from ingredients you will have on hand, so I thought it would be fun to try these as cupcakes for Mom’s big birthday party earlier this month. 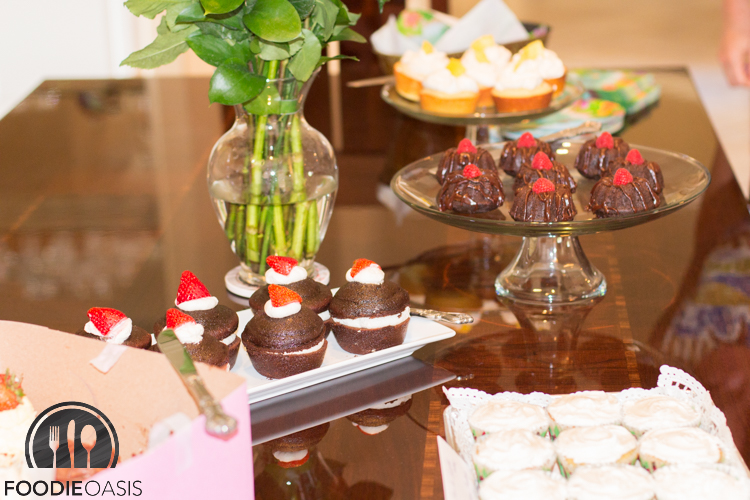 But I wanted to jazz them up for the birthday party, which is where I got inspiration from Mom.  She has always made great pies, including luscious cream pies like coconut cream, banana cream, and the inspiration for these cupcakes—pineapple cream.  I decided that the plain cake cupcakes would be great filled with pineapple cream.

Now for the rum.  My grandmother didn’t drink alcohol, so the rum didn’t come from her, but the rest of my family and most of my friends love rum, which I thought would add a tropical twist to the cupcakes.

Now it was time to start my experiment, so I made a batch of jumbo “Plain Cake” cupcakes (see the recipe below).  I figured it would be easier to fill jumbo cupcakes than regular-sized ones.  Of course, I had to try one when they came out of the oven.  It had been years since I had had Grandmother’s cake.  The memories flooded in.  I had forgotten that this cake has a thin sugar crust on top, which is yummy.  The texture is a little denser and coarser than many cakes, but I realized that it would be just right to stand up to the cream filling I had planned and the flavor was as good as I remembered.  About then, Jeff walked by and grabbed a bite of one of the cupcakes and agreed, so on to the next step.

Time for the next layer of flavor, so I started the pineapple cream filling.  I put a cup of chopped pineapple in my mini-food processor and pulsed it until I had fresh, crushed pineapple.   The pineapple was destined to be added to the cream filling, but I needed to drain off the juice first so it wouldn’t be too wet and water down the filling.  So I let the pineapple hang out in a strainer over a bowl while I started on the cream filling (see recipe below).   For the cream filling, I started with a recipe I had previously posted only to figure out that I had posted the wrong amount of flour—not good!  (If you tried my “Easy Pastry Cream” before and didn’t find it so easy because it didn’t get thick enough, my sincere apologies.  I goofed when I typed it up.  The recipe should have called for 4 Tbsp. of flour, or 1/4 cup, rather than the 2 Tbsp. I had previously posted.  That post has been updated with the correction.)

While the pastry cream cooled, I used a small round cutter to make a hole in the center of each of the cupcakes.  But I was careful to not cut all the way through the bottom of cupcakes because I didn’t want the filling to run out!  For moisture and flavor, I brushed the inside of each “hole” with dark rum and then piped in the pineapple cream.  A dollop of whipped cream and a small piece of fresh pineapple on top made these cupcakes a special addition to Mom’s birthday party and were a hit with the rum lovers in the crowd.  Hope you like them too!

Print
Prep time
10 mins
Cook time
30 mins
Total time
40 mins
You can substitute coconut flakes for the pineapple if you prefer coconut cream filling!
Author: FoodieOasis | Jo Dale Carothers
Recipe type: Dessert
Ingredients
Instructions
Notes
If you don't have a double boiler, just place a small amount of water in a pot. Then place a heatproof bowl on top of the pot so that the heatproof bowl sits partially inside the pot but does not touch the water.
3.3.3077

Ingredient Challenge: Use Fresh Beets This Month & Post a Photo!